Singer/songwriter and 2022’s breakout Centricity Music artist Katy Nichole released her self-titled, first EP at digital and streaming outlets everywhere via https://fanlink.to/katynichole. The highly anticipated EP features the multiformat No. 1 hit, “In Jesus Name (God of Possible),” the current single climbing the charts, “God Is In This Story (Feat. Big Daddy Weave),” “Jesus Changed My Life” and three more tracks, each drawing from her prayer journal and well of life experiences.

“This EP is coming from a real, honest and not holding back anything place because I’m so unashamed to say the name of Jesus and to tell people how good He really is and how treasured by God they are,” says Nichole. “I want people to know that my God is good even though my circumstances are not always good.”

Singing songs from her EP, Nichole made her Grand Ole Opry debut June 18, receiving a rare standing ovation for a debut appearance from the thousands in attendance. A behind-the-scenes view of her appearance can be seen at www.instagram.com/p/Ce-EbdeAe8K. 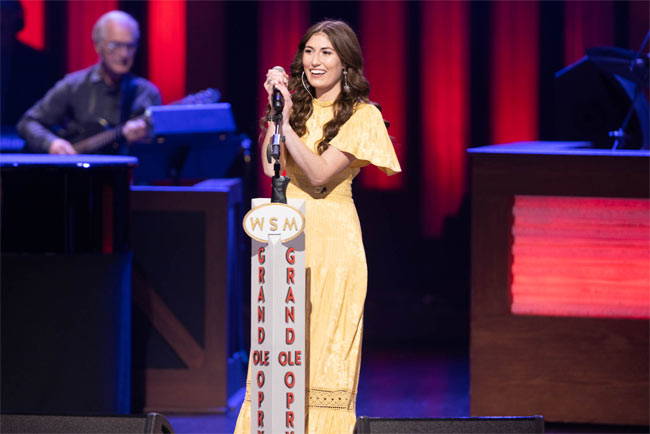 Along with her Opry debut, Nichole received a standing ovation on the same stage during the K-LOVE Fan Awards where her song “In Jesus Name (God of Possible)” was named “Worship Song of the Year.”

Holding the most consecutive weeks at No. 1 for a debut single from a female artist ever on both the Billboard Hot Christian Songs (14 weeks) and Christian Airplay (9 weeks) charts, “In Jesus Name (God of Possible)” also continues at No. 1 on the iTunes Christian & Gospel Songs chart, occupying that top spot virtually every week since it released Jan. 26. Nichole further breaks into the Top 5 on the Billboard Emerging Artist Chart and was named a YouTube “Trending Artist On The Rise” for the song’s concept video that has been streamed nearly six million times.

“I’m completely in awe of Jesus,” shares Nichole. “Over this last few weeks, I’ve played both of my dream venues, Red Rocks Amphitheater with Chris Tomlin and the Grand Ole Opry. So many dreams that have been kept in my heart since I was about 11 years old have come true, and I’m beyond thankful right now…I’m honored that the Lord has given me this gift to share His mighty name with others.”

Katy Nichole is pictured accepting her first K-LOVE Fan Award and singing “In Jesus Name (God of Possible)” May 29 on the Grand Ole Opry stage during the K-LOVE Fan Awards.

Twenty-one-year-old Nichole created the lead single from her first EP, “In Jesus Name (God of Possible),” from words in her prayer journal that were written in the midst of a global health crisis and in response to her own story of suffering, hope and healing chronicled at www.instagram.com/p/CcOQDlxvobh.