Black River Christian’s Hannah Kerr announces the October 20 release of her holiday EP, Emmanuel. The six-song project was produced by Mark Miller and will be available in both digital and physical formats. Emmanuel includes seasonal favorites such as “White Christmas,” “O Come O Come Emmanuel,” “Breath of Heaven,” and “Have Yourself A Merry Little Christmas,” and two original songs – “Emmanuel” co-written by Kerr, Andy Gullahorn and Jill Phillips, and “Christmas Eve in Bethlehem,” which she wrote with Jason Earley.

Looking forward to sharing new music, Kerr says, “I’m so excited to release this EP! Christmas is my favorite holiday and always such a good reminder of the nearness of our Savior. I hope these songs bring peace and joy to everyone who listens to them. I’m praying that we will all be reminded of Emmanuel–our God who was with us on that first Christmas in Bethlehem, and who is with us now.”

On tour now, catch Kerr this fall in a city near you on the Everything or Nothing Tour with Carrollton.

Before heading out on tour with Carrollton, Hannah Kerr visited Seacrest Studios at Monroe Carell Jr. Children’s Hospital at Vanderbilt in partnership with Love Your Melon, a non-profit program that helps fight against pediatric cancer and provides immediate support for families of children battling cancer. Kerr spent time with many of the children and was able to share a few of her songs with them, including her single “Warrior.” 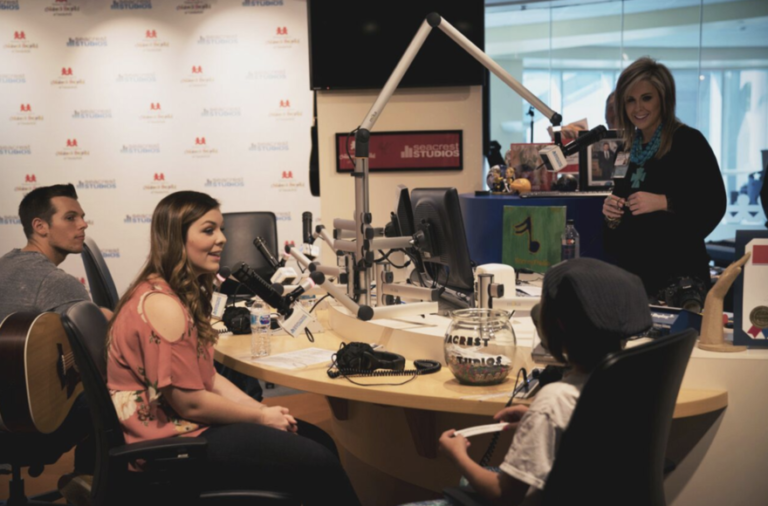 Kerr’s current single, “Warrior,” continues to impact radio and is currently top 30 on multiple charts and continues to receive adds weekly. The song is from her debut LP Overflow and is the follow-up single to her top 25 hit “Radiate.” Be sure to view the “Warrior” official lyric video below.

About Hannah Kerr: As the first artist signed to Black River Christian, Hannah Kerr’s Christmas EP, Emmanuel, is set to release October 20, featuring six tracks with two originals both co-written by Kerr. Kerr’s newest single “Warrior” from her debut full-length album titled Overflow, produced by Sawyer Brown’s lead singer and Casting Crowns’ producer Mark Miller, is climbing the charts. Overflow has been streamed over 3 million times and also includes the Top 25 hit “Radiate.” The success of Overflow and her constant touring has allowed “Warrior” to become a recognizable fan favorite and it has been streamed over 2 million times. The new single, “Warrior,” as well as a pop-infused “Warrior (Battle Cry Remix),” are available now at all digital retailers and streaming services. Kerr has toured with such major artists as Casting Crowns, Matt Maher, Building 429, Jonny Diaz, and Matt Hammitt, as well as sharing the stage with for KING & COUNTRY, Newsboys, and Kari Jobe. Matt Maher’s hit single, “Your Love Defends Me,” is co-written by Kerr and climbing up the Christian Radio charts. Kerr frequently leads worship at contemporary churches across the country as her ministry extends beyond radio and touring. She has been named the 1st Ambassador for Youth For Tomorrow’s Jodi McQueen Therapeutic Music & Arts Center and “YFT Heart Beats” campaign. Kerr partnered with Love Your Melon, an organization dedicated to fighting childhood cancer, to create limited edition “Warrior” Love Your Melon beanies. While handling a busy career, Kerr attends Belmont University in its Ministry and Worship program.

Hannah Kerr began publicly singing at the age of five in her hometown church in Buffalo, N.Y. Even though she grew up in a musical family, she never aspired to become a singer. Eventually Kerr’s family moved to Nashville, Tennessee when she was a teenager and she started approaching her musical talents with the heart of a worshipper and started songwriting and performing. One of her recordings caught the ear of Sawyer’s Brown lead singer and Casting Crowns producer, Mark Miller, and he affirmed Kerr’s calling for a music ministry. She became the flagship artist for Black River Christian. For more information, please visit HannahKerrMusic.com, Facebook, Twitter, Instagram and YouTube.

About Black River Christian: As an imprint label of Black River Entertainment, Black River Christian is home to artists’ Hannah Kerr and Josh Wilson. Hannah Kerr’s single “Warrior” was the most added song at Christian Radio in its add week and continues to climb the charts; with her debut album Overflow and her anticipated Christmas EP, Emmanuel, Hannah is continuing to find success in spreading ministry through her music. Josh Wilson recently signed with the label in 2017 and is in the studio writing and recording his first project on Black River Christian. Wilson has been on the road touring with Building 429 during the Summer and Fall 2017. In September 2017, Black River Christian released its free worship on-the-go app, BRC at the River.

The label was founded in September 2015 by combining the talents and passions of Black River Entertainment CEO Gordon Kerr, Casting Crowns’ Mark Hall and veteran/producer and Sawyer Brown front man Mark Miller. Black River Christian is committed to spreading the Gospel of our Lord and Savior Jesus Christ through artists who are committed to ministry through music.