Multi-GRAMMY nominated artist Matthew West rings in the holidays with his new full-length album, We Need Christmas, available now. In addition to his new album, West will be celebrating the season in December with his “We Need Christmas” tour. This project marks West’s third Christmas album, and it is comprised of classics reimagined in his own style as well as original songs such as the title track and the Thanksgiving 2020 overnight sensation “Gobble Gobble.” Celebrating last Friday’s release and beginning the holiday season early, he premiered the music video for “We Need Christmas” on YouTube here.

“These past couple of years have felt like peace is in short supply, hope has been hard to find, and love and joy have been lost for so many,” shares Matthew West about the inspiration for his new project. “Christmas is a time when our hearts can be powerfully reminded that the peace, hope, love, and joy we all need can still be found in a savior. We Need Christmas combines my love of the classics like ‘I’ll Be Home for Christmas,’ with my love for writing and composing songs I hope will be new classics for years to come. Holiday albums give me a chance to be eclectic in musical styling, and hey, it was even fun to get dressed up in a tuxedo! My wife said I clean up good. So this Christmas album is already a win for me!”

Along with his tour, West’s non-profit PopWE will be partnering up for some unique holiday giving back campaigns throughout the next two months. During the Thanksgiving season, PopWE is joining forces with Samaritan’s Purse to help provide meals for the hungry around the world. Into the Christmas season, they will be searching for families and individuals who need Christmas and will surprise them with a financial gift to help during the season. In addition, you will be able to find a special devotional series called “We Need Christmas” here.

West continues to impact his fans with his songwriting as he was recently awarded ASCAP’s Christian Songwriter of the Year for the fourth time in his career. West was also nominated for four 2021 GMA Dove Awards: Song of the Year (“Truth Be Told”), Songwriter of the Year (Artist), Inspirational Song of the Year (co-writing “There Is A God” for Phillips, Craig & Dean), and for Short Form Video of the Year (“Truth Be Told”). And his current single “What If” is climbing to the top of the charts coming in this week at No. 1 on the Billboard Christian Airplay chart, and he currently has six songs he has co-written in the Top 30 the same chart. Fans can also hear incredible stories told during his own Matthew West Podcast, where he celebrated more than 1 million downloads in its first year. Weekly he helps others tell their stories to help make an impact in people’s lives. Check his podcast out here on the Annie F. Downs’ That Sounds Fun Podcast Network. 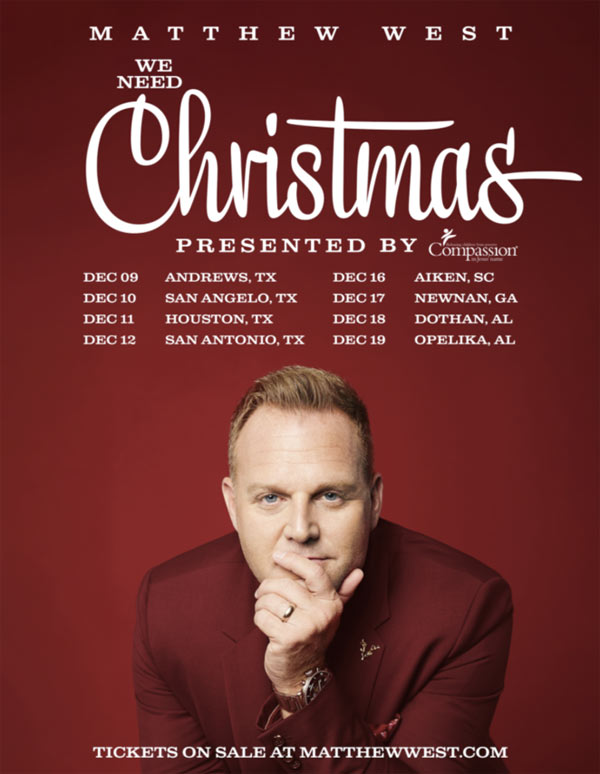