for KING and COUNTRY Announce New Album What Are We Waiting For?

Home Christian News for KING and COUNTRY Announce New Album What Are We Waiting For?
NextPrevious

for KING and COUNTRY Announce New Album What Are We Waiting For?

Last Friday, four-time GRAMMY® winning duo and Curb | Word Entertainment recording artist for KING & COUNTRY announced the upcoming arrival of their brand-new album What Are We Waiting For?, out on Friday March 11th.What Are We Waiting For? is the platinum-selling duo’s first album of new music in three years and features 13 original tracks from Joel and Luke Smallbone. Fans can expect a return to the lush and evocative pop sounds the duo has perfected over the years, while Joel and Luke take pen to paper and confront relevant issues with poise, grace, and groove. Pre-order or pre-save the album at the link HERE.

Check out the music video for lead single “Relate” HERE. 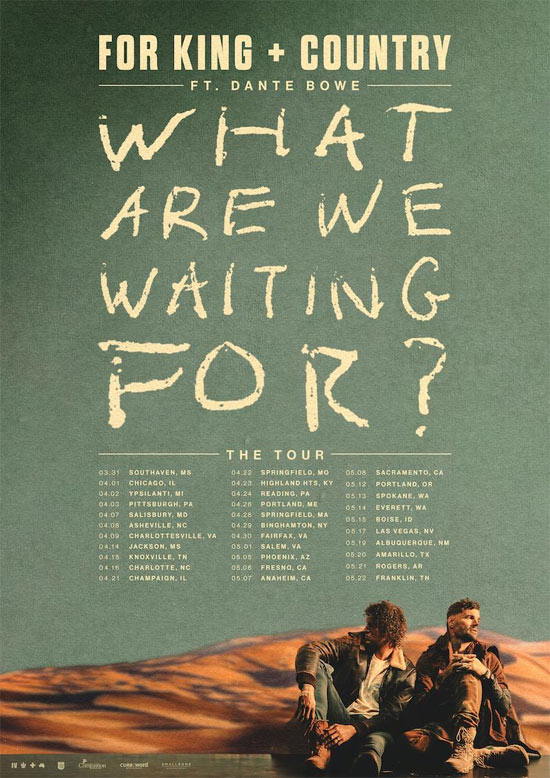 In conjunction with today’s announcement, for KING & COUNTRY have revealed the launch of “What Are We Waiting For? – The Tour” in Spring of 2022. The 33-date trek will take for KING & COUNTRY to arenas across the United States, performing brand new songs from their upcoming album for the VERY FIRST TIME against the backdrop of an all-new stage design. Tour kicks off on March 31st in Southaven, MS; traveling through Chicago, IL; Phoenix, AZ; Las Vegas, NV; and more before wrapping up in Franklin, TN; on March 22. Joining for KING & COUNTRY on tour will be platinum selling artist Dante Bowe of Maverick City. Ticket presale starts on October 12 at 10am LOCAL, and fans can access by entering the code “WAITING.” General on-sale starts Friday October 15 at 10am LOCAL, click HERE for more information.

“So many of you have encouraged us and spurred us on in this journey since we began the writing process at the top of the year,” Joel and Luke Smallbone share. “We’ve made records before in busses and in dressing rooms, but what’s been particularly beautiful about this one is that we were able to be home with our families. So looking forward to offering these songs to you and coming to see you across the United States next spring on tour!”

As part of the celebration of the album release, for KING & COUNTRY are offering an exclusive fan experience in 2022 to bring folks closer to the music than ever before. The for KING & COUNTRY New Album Weekend Experience takes place across the weekend of March 4 – 6, and offers fans a chance to spend the weekend with Joel and Luke in their home base of Nashville, TN. Perks include a full band concert, exclusive album listening party, meet & greet, and more. For tickets and more information, click the link HERE.

Connect with for KING & COUNTRY