“I believe there is something musically and inspirationally for everyone on this album – it’s full of hope and encouragement that I think we can all use right now,” Danny Gokey shares. “For the most part, my music represents how I grew up and the culture of the United States – our melting pot. Growing up I listened to Christian music, gospel music, country music, hip hop music, and Spanish music. It was all a smorgasbord. If anyone knows me, they know I love diversity and differences – and now more than ever we need to come together despite our differences. On this new album, musically I got to explore some new things and cross some genre borders. I’m excited for listeners to hear the collaborations with the special guests featured on the project, including Gospel, Latin, and even a little rap.”

Gokey is hosting a West Coast Album Release Party tonight in California, celebrating the new album’s release. Next week he will return to his roots for an album release show on August 25th in Saint Paul, MN, and a hometown show on August 26th in Wisconsin. Details for all of these shows can be found on his website. He will also be having a Livestream event for those that can’t make it to a show in-person this week on Sunday, August 22nd at 7 pm CT on his Facebook and YouTube pages.

Jesus People includes the current radio single “Stand In Faith,” which is now Top 30 and climbing. The single’s weekly streaming continues to increase week over week and gaining traction from the recently released official music video. He’s also debuted videos for “Do For Love (feat. Angie Rose),” “Agradecido,” and “He Believes In You” this summer. The videos from Jesus People already have combined views of more than 9M thus far. Today the lyric video for “Make A Difference” is available below.

Leading up to the album’s release, media have shared about this project highlighting the message and style featured on Jesus People. Outlets such as People.com, Pure Flix Podcast, Huckabee, Annie F. Down’s “That Sounds Fun Podcast” and the Milwaukee Journal Sentinel have all interviewed Gokey recently. Today Amazon Music’s billboard in Times Square features Gokey and Jesus People (see image below). Fans will also be able to see Gokey on tour with his headlining “Stand In Faith” tour featuring special guest Colton Dixon and produced by Transparent Productions. Go to DannyGokey.com for a complete list of tour dates, and JesusPeople.DannyGokey.com for exclusive merchandise. 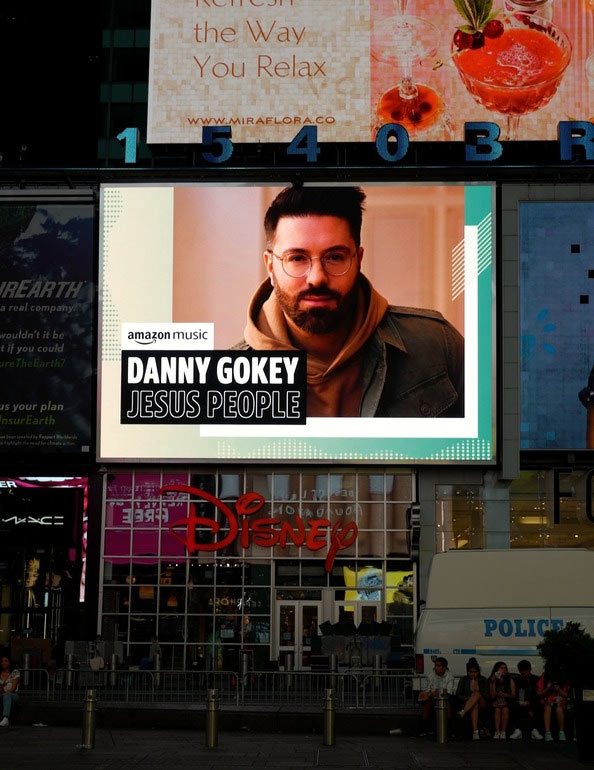 Agradecido, Capitol CMG, Danny Gokey, Do For Love, He Believes In You, Jesus People, Make A Difference, Stand In Faith