Here at FreeCCM we want to keep you in the loop on up & coming Christian artists we think you’ll love! Today we are so excited to introduce you to the band VERSES and their debut single “Thankful.”

When Australian pop trio VERSES, made of up of brothers Joel and Luke O’Dea and Luke’s wife Jess O’Dea, wrote their debut single “Thankful,” they had no idea how quickly the song’s message would be put to the test. In early 2020, just three weeks after signing a long-prayed-for record deal with Fair Trade, the band was fully ready to launch their new song into the world, but instead found themselves on a flight back home to Australia, not knowing when they’d be able to return to Nashville.

The band’s debut single out now, “Thankful,” a joy-filled piano-driven pop anthem, plays like a montage of the band’s beginnings and everything that came after. They’ve learned firsthand that thankfulness is more than a momentary feeling, more than things going the way you want them to. For VERSES, finding real joy in the goodness of God has given them a spirit of thankfulness that colors every decision they make.

Now home in Australia with plans to come back to the states as soon as COVID restrictions allow, the band remains thankful for everything that’s happened and hopeful for what’s to come. For them, it’s less about what they get to do and more about where their songs are able to go. “That’s the mission of VERSES,” Luke says, “singing these Biblical truths into people’s hearts so it will become a part of their everyday life.” “We are fully convinced it doesn’t matter what medium God’s word goes out in,” Jess says, “it will complete everything it was sent to do. That’s special to us, that we get to send out the word of God in places we’ll never go to. That’s our true north.” 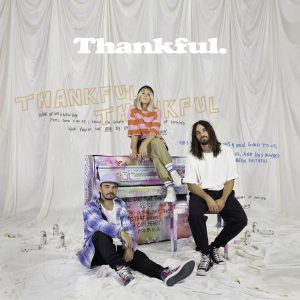