We got our hands a few extra special Hope Darst “Peace Be Still” merch boxes featuring a copy of her debut album Peace Be Still, long sleeve “Peace Be Still” t-shirt plus an 8×10 double sided lyric print that we are giving away and YOU could be a winner! Hope Darst is a wife, mother, worship leader and songwriter who has created a worship album (Peace Be Still) that delivers, encourages and inspires as she shares her need for the Savior she knows so deeply yet longs to know more.

Enter for your chance at winning a “Peace Be Still” Merch box from Hope Darst now!

Over the past 15 years, Hope Darst, has been leading worship, growing her family and serving the local church. She wears many titles…wife, mother, worship leader and songwriter. In 2013, after a decade of being in full-time ministry and on staff at her local church, Hope found herself in a season of transition as she focused on being a full-time mom. During this time, Hope and her family visited a small gathering of people in a basement and encountered the presence of God in a new way. “I had been “doing ministry” for so long that I had ignored so many parts of my heart and life that needed ministry. I was desperate for healing and a fresh encounter with God. That year of rest became the foundation for discovering a new way of living with Christ. Week after week I would enter God’s presence during worship and the word and experience deep emotional and mental healing that I had long thought was impossible.” This “gathering” would eventually become what is now The Belonging Co. church.

After a few years, Hope found herself leading worship again and being part of the songwriting team at The Belonging Co. A renewed passion begin to grow. “God really had to deconstruct so many of my paradigms about praise and worship during that season. For so many years, I lead from a place of needing approval, but as God began to heal my heart and mind I began to lead worship from a place of humility, vulnerability and intimacy. Everything I do is now rooted in the belief that God truly wants us to live in freedom – from parenting, friendships, marriage, songwriting, leading – the goal is to live in freedom in every area of our lives and bring others in to the awareness that God wants to set them free too.”

In 2020, Hope signed her first recording contract with Fair Trade Music Services. She released her first single, “Peace Be Still” in February 2020 followed by her debut album in August. Hope also appears on both albums released by The Belonging Co., All the Earth and Awe+Wonder. You can find Hope’s music on all platforms.

Hope has been married to the love of her life, David, for 14 years. They live in Nashville, TN with their two daughters Olivia and Brooklyn.

About Peace Be Still 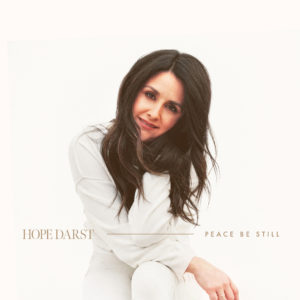 Title track “Peace Be Still,” a song that’s already gaining traction in churches across the country, was the first song Hope wrote for the project. “When we wrote this song, we wanted to talk about going to battle for peace, fighting for peace,” Hope says. “That’s contrary to how we think we need to approach peace, but the enemy comes to kill and destroy. He wants to rob us of a mind of rest. This song is a promise that you’re confessing over yourself, but it’s also a weapon in that moment when fear is raging against you.”

Up tempo “Promise Keeper” is about God’s nature and how He doesn’t break His promises. “That’s been such a huge part of my life. I’ve been through so many seasons of loss and every season I chose to believe that God’s goodness was still wrapped in that circumstance. I’ve had to fight for that.” Similarly, moving track “Who You’ve Always Been” is a reminder that God is unchanging. His character remains the same from beginning to end.

While not a live record, there’s an energy that permeates the entire album, an emotion that’s felt as much as its heard. Songs like “Love Like This” and “Start Over” are filled with awe and wonder at a God who carries us, who never abandons, whose love never fails. Sonically, each track is a wind-in-your-hair soaring triumph perfectly matching Hope’s powerhouse declarations as well as her delicately sung prayers.

Well worth the wait, Hope Darst has created something more than a standard worship album. Peace Be Still delivers, encourages and inspires, as Hope shares her need for the Savior she knows so deeply yet longs to know more.

Win a “Peace Be Still” merch box from Hope Darst! Don’t forget to sign-up for our newsletter and never miss a contest!