Enter To Win A Newsboys “Love One Another” Prize Pack

Enter To Win A Newsboys “Love One Another” Prize Pack

To celebrate the Newsboys’ new single “Love One Another” we are giving away a special Newsboys prize pack featuring:

And YOU could be a winner!

Enter for your chance at winning these exclusive items that were only available through their website & on tour. Good luck!

Newsboys are back with a musical celebration that joins the veteran band’s past and future. United is more than just an album. This reimagining melds old and new versions of this GRAMMY-nominated, platinum-selling act into a modern day supergroup.

Known for their unparalleled live shows, where the energy is at a fever pitch, the drum kit rotates, and the production is unmatched, Newsboys’ expanded lineup represents the same ideals on stage that the band members harnessed in the studio for United, where themes of friendship, unity and diversity organically emerged. 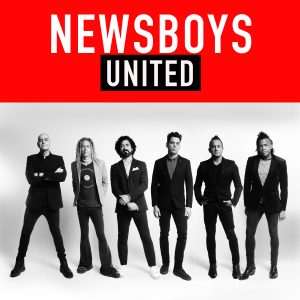 “In a very un-united United States these days, it’s powerful to see a Caucasian and an African-American on the stage speaking the same message in a unified way,” Tait asserts. Furler and Tait’s unified front on stage translates to tape as they effortlessly trade lead vocals on the album, blending both the past and the present.

Along with Geoff Duncan, Furler steered the production reigns and returned as a lyricist for the band, co-penning four of the collection’s 10 tracks. The funky groove of “Love One Another,” which he co-wrote, features guest vocals from former dcTalk member Kevin Max, while tracks like the worshipful “Set Me Ablaze,” originally recorded by Bethel Music, and soaring lead single “Greatness Of Our God” continue Newsboys’ rich history of recording songs that resonate with fans of all ages.

The magic of two lead singers, six life-long friends and one rock-solid mission form the undercurrent for both the album and the band. “Recording this Newsboys United album did so much more than just bring two eras of the band together,” Furler observes. “It has made us one in spirit, purpose and love.”

No matter who’s taking the lead, Newsboys knows what they’ve forged over 30-plus years is rare. It goes beyond music, awards and notoriety. No matter what stage they’re gracing, Newsboys will be standing tall as a symbol of unity, defying the odds, together.

Win the limited edition United vinyl, tour book and autographed CD booklet! Plus don’t forget to sign-up for our newsletter and never miss a contest!

Newsboys “Love One Another” Prize Pack

Love One Another (Official Music Video)