To Love A Fool, the highly anticipated full-length sophomore set from GRAMMY®-nominated Bethel Music singer/songwriter Cory Asbury, is slated for release July 31. Produced by Paul Mabury (Lauren Daigle, NEEDTOBREATHE), To Love A Fool showcases Asbury at his most vulnerable, delivering 10 selections that both contemplate and extol the unparalleled love of God.

From the intimate reflections of “Dear God,” “Unraveling” and “I’m Sorry”; to the mountaintop moment of “The Father’s House,” Asbury’s current #1 hit; to the sweet surrender of “Nothing More Than You,” the overarching themes of To Love A Fool were birthed during the “Reckless Love” singer/songwriter’s 2019 year-long sabbatical.

“I think I wrote eight songs in two weeks,” Asbury recalls. “I couldn’t shut it off. I couldn’t sleep at night, and when I did, I would just be having dreams; and the dreams would be songs and song ideas. It felt like the most prolific writing season of my whole life. It felt like the heavens opened and all of a sudden, God was speaking. It was awesome.”

“The title of the album comes from the lyric in ‘Nothing More Than You’ which says, ‘The highest King of Heaven CHOSE to love a fool,’” he explains. “It’s a beautiful paradox. Through the first album and now this one, I realized that I just can’t seem to get over the love of God. I’m stuck on it.”

“He’s not a small-minded bookkeeper peering over the balcony of heaven waiting for us to mess up,” Asbury continues. “No, His love keeps no record of wrongs. For God so loved the world, He came close. He casts our sin as far as the east is from the west. Because He loves us, we learn to love ourselves. That’s an astounding thought. We’ve got to learn to love ourselves, fools though we are.”

Asbury is putting the selection of his next single into the hands of fans, via an election-style campaign contest. Beginning today, listeners are invited to vote here for either the mid-tempo “Canyons”—a testament to the vastness of His love, penned by Asbury and Ethan Hulse—or the pop-fueled “Sparrows,” a song of adoration to the God who meets every need, co-written by Asbury, Hulse, Andrew Ripp and Jared Anderson. The contest ends this Thursday, July 2, and the track receiving the most votes will be released to digital platforms July 10. 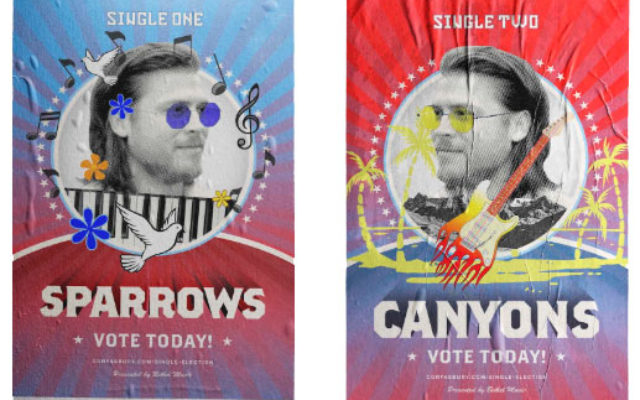 Among Bethel Music’s world-renowned lineup of songwriters and worship leaders, Cory Asbury has earned a GRAMMY® nomination, three GMA Dove Awards and two K-LOVE Fan Awards. He catapulted into the spotlight with his megahit single “Reckless Love,” the title track from his best-selling 2018 Bethel Music debut. “Reckless Love” spent a total of 18 weeks at #1 at Christian radio; has amassed nearly 300 million streams to date; and was named ASCAP’s Christian Music Song of the Year in 2019. Co-penned by Asbury, the single also landed at #4 on Billboard’s Hot Christian Songs (2010s) chart, a ranking of the genre’s biggest songs of the past 10 years.

Asbury is featured on Revival’s In The Air, the latest project from GRAMMY®-nominated, Dove Award-winning Bethel Music. The chart-topping album, which released last month, includes the Asbury-led “Egypt,” a celebration of God’s faithfulness, and the spontaneous “Breathe/Rest.” Asbury, along with his wife and four children, resides in Kalamazoo, Michigan, where he serves as a worship pastor at Radiant Church.