“Wow—part of me had begun to believe I’d always be in the shadow of ‘Reckless Love,’ so to see ‘The Father’s House’ resonate so quickly and so deeply in listeners’ hearts is a massive blessing,” Asbury says. “I’m so thankful to my Bethel Music family and radio stations all across the country.” 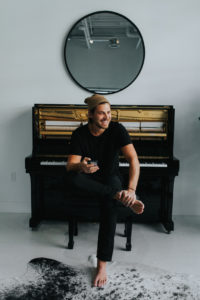 “This song was actually born two-and-a-half, maybe three years, before it was fully written,” he adds. “I was in the middle of a tour and my soul was tired. I was just weary, feeling broken, weak and messed up—all the things we feel as humans—and I sat down at the piano. For me, music is therapy; it’s a time when I can pour out my heart before the Lord. All of a sudden, this phrase just came out: ‘You never wanted perfect, You just wanted my heart.’ It was like a lightbulb went off. I realized in that moment that it wasn’t about me having it all together, even in the midst of weakness and brokenness. It was about offering my heart in that space. I started weeping and saying that phrase over and over. It was therapy for my soul.”

Among Bethel Music’s world-renowned lineup of songwriters and worship leaders, Asbury is featured on the GRAMMY®-nominated, Dove Award-winning collective’s latest release, Revival’s In The Air. The 17-track set bowed last week and includes the Asbury-led “Egypt,” a celebration of God’s faithfulness, and the spontaneous “Breathe/Rest.”

Catapulted into the spotlight with his megahit single “Reckless Love,” the title track from his best-selling 2018 Bethel Music debut, Cory Asbury has earned a GRAMMY® nomination, three GMA Dove Awards and two K-LOVE Fan Awards. “Reckless Love” spent a total of 18 weeks at #1 at Christian radio; has amassed nearly 300 million streams to date; and was named ASCAP’s Christian Music Song of the Year in 2019. “Reckless Love” also landed at #4 on Billboard’s Hot Christian Songs (2010s) chart, a ranking of the genre’s biggest songs of the past 10 years. Asbury, along with his wife and four children, reside in Kalamazoo, Michigan, where he serves as a worship pastor at Radiant Church. Follow Asbury on Instagram.