From Duncan Phillips’ spinning drum riser to the high-octane antics of frontmen Michael Tait and Peter Furler, GRAMMY®-nominated, Platinum®-selling Newsboys are set to bring their unparalleled concert experience home with April 17’s United: Live. The five-song FairTrade Services EP is available to pre-save now, and arrives in tandem with the premiere of Newsboys’ “Friday Spring Concert Series” on YouTube.

Recorded live during the supergroup’s recent “Greatness Of Our God Tour,” the EP features the hit single “Greatness Of Our God,” “Symphony,” “Love One Another,” “Only The Son (Yeshua)” and “Beautiful Story”—all selections from Newsboys’ 2019 watershed studio recording, United. The project, which debuted at #1 on Billboard’s Top Christian Albums chart, marked the return of former members Peter Furler and Phil Joel alongside Newsboys’ Michael Tait, Duncan Phillips, Jeff Frankenstein and Jody Davis.

With more than a million YouTube subscribers, the band is also slated to showcase the “Friday Spring Concert Series” on their NewsboysTV channel from April 17-May 8. Beginning with the joy-filled anthem “Love One Another” (feat. Kevin Max), a member of Newsboys will be on hand to host the premiere of a new concert video from United: Live each Friday at 7:00 pm CT. The series will also be available on iTunes/Apple Music. 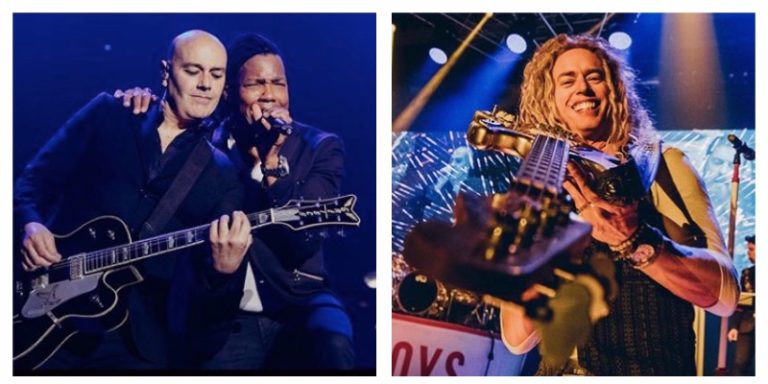 “Just a few short months ago we set out to capture some special performances from our tour,” explains Newsboys’ Jeff Frankenstein. “Little did we know we were all about to experience something that none of us have seen in our lifetime—weeks of isolation at home during a global pandemic. We hope these recordings can be a blessing for our fans while we are all ‘on pause’ in this season. We can’t wait to get back on the road, but in the meantime, we hope folks enjoy these songs live from the big stage!”

Since reuniting two years ago, the history-making, six-member Newsboys “United” lineup has played more than 250 concerts to date, drawing capacity audiences around the country. With legions of devoted fans spanning multiple generations, Newsboys are known for their electrifying headlining set boasting a string of seminal hits from their three-decade career. The supergroup is slated to return to the road in August for a series of rescheduled “Greatness Of Our God Tour” shows. Visit newsboys.com for a complete list of dates.

One of the most influential bands in Christian music history, GRAMMY®-nominated, Platinum®-selling Newsboys have sold more than 10 million units, amassed eight Gold® certifications, 33 #1 radio hits, four GRAMMY® nominations, two American Music Award nominations and multiple Dove Awards. Since their formation in Australia three decades ago, Newsboys have released 24 recordings and their signature songs include “We Believe,” “He Reigns,” “Miracles,” “Born Again” and the Platinum®-certified megahit, “God’s Not Dead.”