Six-time Dove Award-winning producer and solo artist GAWVI recently released a video on social media addressing COVID-19 pandemic encouraging fans that while we are called to be socially distant, to not become spiritually distant through these challenging times. In the video he explains why he is choosing to continue to release new music saying:

“Yo what up you guys. it’s a crazy time, everyone is having crazy conversations about what’s going on. I’m praying for the people overseas that are struggling through all this, for the people in our country going through all of this. I’m trying to wrap my head around all that is going on. And the team and I, we were talking about if we should even release music, but then I thought about how much music has impacted my life through painful times so listen, at midnight tonight I’m going to release a new song for you guys, I really didn’t want to release music during this time, but I know, and many have told me, that this can bring hope, so I hope this brings hope and I love you guys and I’m praying for you all and I know we need to be socially distant but it’s not a time for us to be spiritually distant. So I love you guys.”

In an effort to inspire and bring hope to the community, GAWVI has released “Not Too Far”, a brand new track featured on Heathen, his upcoming studio album set to drop on April 10, 2020.

“‘Not Too Far’ illustrates what you can expect from my whole album,” says GAWVI. “This song says, ‘no matter who you are, no matter what you’re going through, God has been there and He’s right there. So, you’re not a label, you’re not a Heathen. You are God’s design.”

Additionally, the Grammy-nominated producer has unveiled the 17-track list for Heathen (see below) and a visual piece for “Not Too Far” available to view on YouTube. 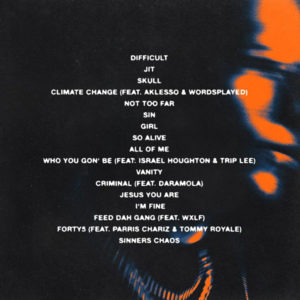