2. Newsboys United “Greatness Of Our God Tour” with special guests Mandisa and Adam Agee
Back by popular demand, the spring leg of the “Greatness Of Our God” Tour will once again bring together former members Peter Furler and Phil Joel with Newsboys’ Michael Tait, Duncan Phillips, Jeff Frankenstein and Jody Davis. The iconic band will be taking the stage to perform several of the new songs from their recently released United album, as well as a set of songs spanning their three-decade career. Kicking off Feb. 6, in Eden Prairie, Minn., the Greatness Of Our God Tour will also feature Grammy-winning American Idol Season 5 finalist Mandisa and acclaimed singer/songwriter Adam Agee as special guests. The tour is slated to run February through April, making stops in Minnesota, South Dakota, Illinois, Kansas, Oklahoma, Indiana, Virginia, Michigan, Wisconsin, Georgia and more, before wrapping up April 26, in Grand Prairie, Texas.

4. for KING & COUNTRY “North America: The Encore Tour”
With 14 added shows in arenas across the United States, for KING & COUNTRY will take the stage at the top of each show and play more music than ever before – including every song off their most recent album, burn the ships, all of the fan favorites and maybe even an unreleased song! And in honor of burn the ships – the stage and lighting design is conceptually inspired by the bow of a ship, spanning the length of the arena floor to make it our most elaborate and intimate production yet.

8. Hillsong Worship “Awake Tour” with special guests Kari Jobe and Cody Carnes
Hillsong Worship is taking the Awake Tour to venues across the country next year. Special guests Kari Jobe and Cody Carnes will support the globally renowned Christian musical worship group on tour which kicks off on May 1 in Houston, Texas. The tour will stop in major U.S. cities including Denver, Salt Lake City, and Bakersfield.

9. Casting Crowns “Only Jesus Tour” with special guest Matthew West
Grammy-winning multi-platinum group Casting Crowns has announced plans to extend its Only Jesus Tour into 2020, following a successful run in 2019 that included stops in nearly 60 major markets and multiple sellouts in arenas across the country.The tour takes its name from the band’s current top-selling album Only Jesus. The 2020 spring portion of the tour will feature award-winning singer-songwriter Matthew West as special guest. 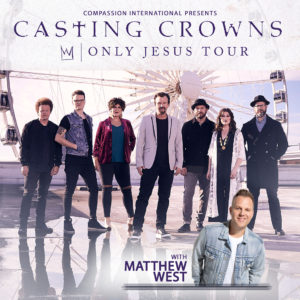