Behind The Song: Bethel Music Shares The Heart Behind Their Song “Raise A Hallelujah (Live)”

Home Christian News Behind The Song: Bethel Music Shares The Heart Behind Their Song “Raise A Hallelujah (Live)”
NextPrevious

Behind The Song: Bethel Music Shares The Heart Behind Their Song “Raise A Hallelujah (Live)”

This week’s featured song story comes to us from Bethel Music. We’re excited to share with you the story behind Their Song “Raise A Hallelujah (Live).”

“This year as a Bethel Music family most of you guys probably were apart of this miracle. A few days before Christmas Joel and Jamie’s little son Jackson was airlifted to the intensive care and we began to fight for Jackson’s life. A couple weeks into the fight we got a text one night from Joel that they weren’t sure that he was going to make it through the night. As soon as I heard and read the message it was like this giant of unbelief stood in front of me. As this giant stood in front of me out of my gut this song started coming out right in the face of the giant. ‘I raise a hallelujah, in the presence of my enemies. I raise a hallelujah, louder than the unbelief.’ As that giant was looking at us I knew he was going to regret the day he ever pointed his sword at Jackson. Just as goliath pointed his sword at David, the sword Goliath pointed at David became the sword the little boy picked up and took the giants head off with. And as we watched this miracle happen in Jackson’s body it was like the giant of unbelief had fallen. And our community just began to sing this song. It was just one note and the symphony of prayer rising for his life.” – Jonathan Helser (Bethel Music)

Click on the video below to hear Jonathan Helser of Bethel Music share the story. Scroll down to listen and read the full lyrics of the song.

From the album Victory. 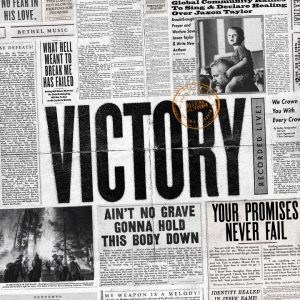 Chorus
I’m gonna sing, in the middle of the storm
Louder and louder, you’re gonna hear my praises roar
Up from the ashes, hope will arise
Death is defeated, the King is alive

Tag
I raise a hallelujah