Chris Rice Talks New Music, Painting, and Why Everyone Needs a Break

Chris Rice Talks New Music, Painting, and Why Everyone Needs a Break

After releasing his last album, Peace Like a River: The Hymns Project, in 2006 Chris Rice took a step out of the limelight to recharge his batteries. Rice sat down with Billboard to talk about what he has been up to.

A self-proclaimed introvert, touring and recording as much as he did drained him of energy. The constant recording and touring also did not allow him time to restore his lost energy by exploring other creative outlets and spending time with his friends.

Since he was no longer touring constantly, Rice had time to be there for others and to be a better neighbor and friend to those around him. “I’ve never been happier. I’ve never been unhappy, but I feel like I’m in a wonderful place where things fit,” he says. “I’m super active and involved with people.” His break from music has allowed him to pursue this and his other passions, such as rock climbing. “I get a lot of time out in nature, which I wrote a lot of songs about,” says Rice. A great deal of his work is inspired by nature. Rice’s time spent climbing and being with those he loves has nourished his creativity over the past decade. 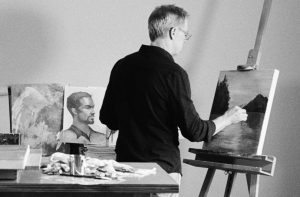 “I loved what I was doing […] but as an introvert, it really took a lot of energy”

Rice didn’t let his creativity waste away; “In the past five years now, I’ve sold like 270 paintings, so I’ve transferred creative energy into that,” he says. Years ago, one of Rice’s friends challenged him to complete one painting a day for 30 days. At the end of the 30 days Rice’s love for art kept him painting. His paintings are posted for sale on his website.

ABOUT Chris Rice:
Chris Rice is the Dove Award winning singer-songwriter who’s recording career started by being signed to a record label by Michael W. Smith. After a nearly 13 year break from recording, Rice brings us a collection of hymns with his new album Untitled Hymn: A Collection of Hymns.

Chris Rice, Hymns, peace like a river, Untitled Hymn: A Collection Of Hymns