Behind The Song: Crowder Shares The Heart Behind His Song “Red Letters”

Home Christian News Behind The Song: Crowder Shares The Heart Behind His Song “Red Letters”
NextPrevious

Behind The Song: Crowder Shares The Heart Behind His Song “Red Letters”

This week’s featured song story comes to us from Crowder. We’re excited to share with you the story behind his song “Red Letters.”

“When I was a kid I remember sitting in the church pew next to my grandmother and asking her why some of her bible was written in red. She explained it was the Red Letter edition and whenever Jesus, God’s only Son, spoke, it was written in red.As a kid I thought that was just how God wrote it. Nope. I was wrong. About this and other things. Turns out it was a guy by the name of Louis Klopsch. It was the late 1800’s and he very much wanted the common man to not only have access to scripture but for the story of God’s reconciliation to jump off the pages as it had for him. One evening, he was reading in Luke 22:20, ‘This cup is the new covenant in my blood, which is poured out for you,’ and that is when Mr. Klopsch had an idea -the words of Jesus in red. He didn’t stop there, he and the editors went all the way to the beginning and took any scripture in the old testament foretelling the arrival of a messiah as well as any scriptures that Jesus was quoted as quoting and put them in red as well; a scarlet thread woven through all of time and creation.” – Crowder

Click on the video below to hear Crowder share the story. Scroll down to listen and read the full lyrics of the song.

From the album I Know A Ghost. 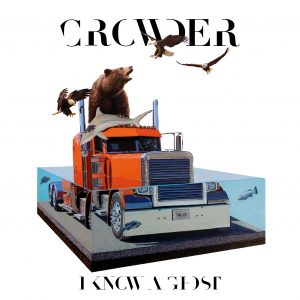