Behind The Song: Lauren Daigle Shares The Heart Behind Her Song “Winter Wonderland”

Behind The Song: Lauren Daigle Shares The Heart Behind Her Song “Winter Wonderland”

This week’s featured song story comes to us from Lauren Daigle. We’re excited to share with you the story behind her song “Winter Wonderland.”

“One of my favorite things about recording new songs for Behold was recording the song “Winter Wonderland.” It was one of those moments in the studio where I was completely nervous because we weren’t planning on recording this song and then we threw it in at the last minute.There was a really special moment where the bass player Chris took me into another room and said ‘hey listen to these chords, listen to these changes.’ These are kind of the notes in between that make this song super special. And it was a highlight moment for me because I felt like I was kind of sitting like a first grader in a classroom really nervous and then this man who has been around music for years and years and years I was able to learn from. So I would say recording “Winter Wonderland” was an absolute highlight.” – Lauren Daigle

Click on the video below to hear Lauren share the story. Scroll down to listen and read the full lyrics of the song.

From the album Behold: A Christmas Collection-Deluxe Edition. 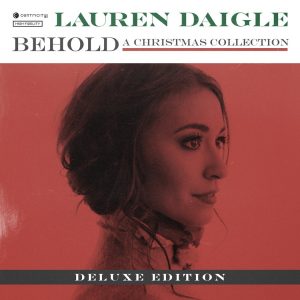 Sleigh bells ring, are you listening
In the lane, snow is glistening
A beautiful sight
We’re happy tonight
Walking in a winter wonderland

In the meadow we could build a snowman
And pretend that he is Parson Brown
He’ll say, “Are you married?” We’ll say, “No man”
“But you can do the job when you’re in town”

Later on, we’ll conspire
As we dream by the fire
To face unafraid
The plans that we’ve made
Walking in a winter wonderland