Video Premiere: Watch The Live Performance Video For “To God All Praise & Glory (Live)” From The Sing Team

Video Premiere: Watch The Live Performance Video For “To God All Praise & Glory (Live)” From The Sing Team

Here at FreeCCM we want to keep you in the loop on Christian artists we think you’ll love! Today we are so excited to introduce you to the band The Sing Team and their song “To God All Praise And Glory (Live).”

Hi, I’m Brian. You’re reading this because you want to know more about our band, The Sing Team. So let me tell you our story…We started The Sing Team in 2011, when I invited friends and family to join us for regular gatherings at our home. We’d share meals together and sing songs, and as we began to write and arrange music, it became clear that we were stumbling upon something special: uniquely motown-inspired grooves and showtune-influenced orchestration as accompaniment for our “everybody-sing-along-now” campy group vocals.

That musical backdrop really helped us rediscover a lost purpose of folk music—the gathering of humans to sing songs as an outpouring of their souls. When this happens, the stage becomes insignificant, and the difference between performer, participant, and listener is indistinguishable.

After a hiatus of several years, I asked the original members of The Sing Team and many new friends to join me in recording a new album—our first full length—that we have called “Sing On!”. It features purposeful hymns that we have sung at weddings and funerals, with our children as lullabies, and at a grandparent’s deathbed. They are songs that have been sung by people of all nationalities and backgrounds—some of them for hundreds of years. We thought it timely to release these songs as a reminder to what people of Christian faith have yearned for and celebrated for generations, and as we, The Sing Team, have chosen ourselves to “Sing On.”

We have your first look at the official live performance video for The Sing Team’s song “To God All Praise And Glory (Live).” Watch it below!

From the album Sing On! 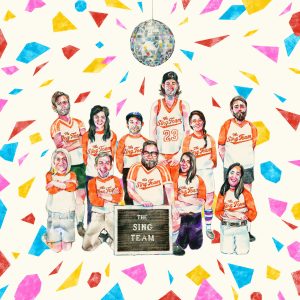