On the heels of their RIAA Certified Gold and GRAMMY® acclaimed Welcome To The New (2014), MercyMe will release LIFER (FAIR TRADE SERVICES) on Mar. 31, 2017.

The core of LIFER is the question of what it looks like to live as followers of Christ that are committed for life. With 2014’s Welcome To The New, MercyMe spoke to the grace and celebrated new life that Christ offers us in entering into faith. With their newest record, MercyMe writes about what it means to live out that faith as a “lifer” in the kingdom of God.

“This new record is the logical next chapter after our last album, and it carries a new perspective,” MercyMe’s Bart Millard remarked. “Welcome To The New was all about grace and identity in Christ; a welcoming to the life of being a new creation by grace. And it’s such an exciting truth to grasp, but then life continues to go on and eventually the newness of that wears off and we need encouragement and support to sustain us. For me personally, I sing about being new every night on tour and I don’t always feel so new. So the album title LIFER and the theme of the record is all about reminding ourselves and others about the victory we have in the end through Christ. We are all in this for life – even on the days when we don’t feel like doing any of it. We want these songs to be a morale boost to remind people of who they are and what Christ has done.”

Filled with positive, uplifting lyrics, along with energetic beats and soaring melodies, this latest offering delivers the massive hits that MercyMe is known for. The debut single “Even If” will serve as a follow-up to the band’s four hit singles found on their previous album.

“The song ‘Even If’ is incredibly special to me,” commented Millard. “My son Sam is 15 years old, and he’s been a diabetic since he was two. When you’re a parent of a child with any kind of chronic illness, these things don’t go away. You have a lot of good days, but some days you feel like you’re losing bad. I was in the midst of one of those bad days when ‘Even If‘ was written. This song is a reminder to people in these difficult situations that don’t seem to go away. God was worthy long before any of these circumstances even showed up. It’s a foundation that was built long before those difficulties came to be. This song is a declaration to God that even if He went silent and never said another word, He’s still worthy to be praised, and He’s our greatest hope in the midst of the trial.” 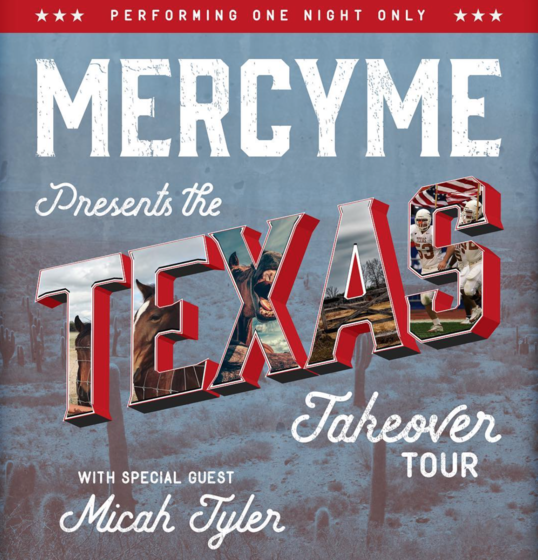 Amidst tour dates across the country, the multi-platinum selling band will head to their home state of Texas for “MercyMe’s Texas Takeover Tour” throughout the month of February with label mate, Micah Tyler. In April, the band will headline a national tour with fellow Fair Trade artists, Hawk Nelson and Micah Tyler. For the latest on all MercyMe tour dates, click here.

LIFER will be available for pre-order on January 27th in Lifeway Christian Stores. Customers who pre-buy the album in their stores will get a free 2 song CD that includes the songs “We Win” and “Lifer.”

LIFER will be available for preorder at Family Christian Bookstores on February 14, and for every album sold $1 will be donated to Pray America.

LIFER will be available for pre-order on Feb. 17 on iTunes and Amazon Music with an instant grat of the debut single “Even If.”

About MercyMe
Since their debut in 2001, GRAMMY®-nominated, multiple American Music Award and Dove Award winners MercyMe have sold more than 9 million units in CD, single and DVD sales, garnered 27 No. 1 multi-format Christian radio singles and four consecutive mainstream radio hits with “I Can Only Imagine,” (No. 4 AC/Top 25 on Top 40/Hot AC), “Here With Me” (No. 4 AC), “Homesick” (Top 10 AC) and “So Long Self.” Their radio success has continued with recent singles “Flawless” (No. 1 for 15 weeks) and “Greater” (No. 1 for 16 weeks), landing them the Top Christian Airplay Artist spot on Billboard’s 2015 Year End charts. MercyMe made history in 2014 as “I Can Only Imagine” surpassed 2 million digital downloads, making it the first song in Christian music to go platinum and double-platinum in the digital domain. In 2009, Billboard named MercyMe’s “Word Of God Speak” the No. 1 Song of The Decade and the group the No. 1 Artist of the Decade in both the Christian Songs and Christian AC Songs categories, recognizing them as one of the industry’s most notable talents. They have sold out venues throughout the US and Canada, including Radio City Music Hall, and have appeared on the Macy’s Thanksgiving Day Parade, The Today Show, CBS This Morning, The Tonight Show with Jay Leno, FOX New Channel’s FOX & Friends, CNN, ABC News and in the pages of Entertainment Weekly, The New York Times, USA Today and more. Their latest project MercyMe, It’s Christmas! (2015) debuted at No. 1 on Billboard’s Holiday Albums chart and became an instant Christmas classic. MercyMe’s eighth studio album, Welcome To The New, garnered two GRAMMY® nods, four radio hits and continues to be a top selling title. LIFER will be available on Mar. 31, 2017.